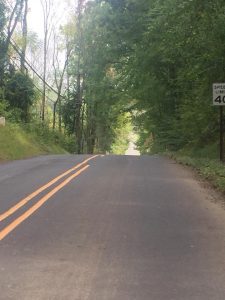 The top of one of the steepest hills around the “block” in Titusville. 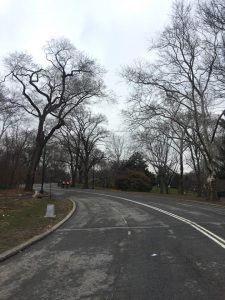 Central park this spring. This hill was hard then. Yesterday, I barely thought about it. 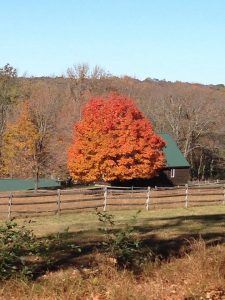 One of the farms along the Titusville “block.”

I have a confession to make. I’ve been on a long hill-hiatus.
I can’t tell you why I stopped, but I was feeling very lazy about hills for about a year or so and only took flat routes or walked up hills. I used to like the challenge but for some reason I decided it was too hard and that I didn’t need to do them anymore.
One of the reasons I’ve been so lazy about them is that when I stay in Titusville, New Jersey, I’m on top of a hill, so no matter which way I go, I must run back up again.
Not only that, there are rolling hills around it, so even on the way down there are constant ups and downs. Same thing on the way up.
But a few months ago I decided to do it again, feeling angry with myself for being lazy. The first time was real tough, but the second time a few days later was much easier and I decided that if I could improve after just one hilly run, my self-imposed “I’m not going to run hills” was silly.
So, needless to say, since then I’ve been challenging myself more and even though it’s been hot and sticky I’ve run the Titusville block and the loop in Central Park regularly.
It’s paid off big time.
Yesterday was the first time since my hill hiatus that the Central Park loop didn’t feel too hard. I ran each hill, enjoying the gorgeous autumn colors and my music,  surprised how easy it was. I love that.