It was very hot and humid, so my husband and I decided to go for a flat easy ride. Instead of riding down the hill from my sister in law’s house, like we usually do, we decided to strap the bikes to the back of the car and drive down to Delaware River to save ourselves from the hot and sticky uphill ride back.
You might remember from previous posts that there is a towpath along Delaware river that stretches almost 60 miles. A gorgeous ride where you pass picturesque historical river towns, and beautiful waterfront homes.
We were thinking of riding all the way to Frenchtown on the New Jersey side of the Delaware, but it was getting even hotter and closer to noon, so we decided to cross the Stockton bridge over to the Pennsylvania side and ride back that way.
Easy, flat and perfect on a hot Memorial weekend right?
As we were riding along, I was thinking of how happy I was to have shown my guests from Sweden this gorgeous area last summer, ruminating that it had almost been a year since they were here already. Time flies faster than I can bike!
Then ahead of us, we notice one of those orange and white structures blocking the path. A printed sign was attached to it with the words, “Path Closed due to Construction.”
We stopped, looked at each other and concluded that there was enough space to go around the sign. Not only that we saw bikers ahead.
Who says you have to stop because it’s closed?!
We keep going until we come to a complete stop behind the other bikers, an older couple, tough as nails it would turn out.
The path was truly blocked here. Big cement blocks with backhoes parked behind it.
The older couple were in the process of pulling their bikes down into the dry, drained canal.
The wife explained that last week they had pulled them across to the road, but she didn’t advice it because it was frightening to ride so close to traffic.
It didn’t look that bad to me, but they said that they would just go through the construction site instead.
Well what can you say to that? If an older couple thinks it’s easier to pull their bikes along a mud-bed in a drained canal and crawl through construction tunnels with your bicycle, who are we to chicken out?
We followed, pulled our bikes down into the canal-bed, bent low to fit into the tunnel, pulling our bikes along and out on the other side. It was very muddy, and I was wondering if there were snakes. Thankfully I didn’t see any.
We kept walking, the older couple was way ahead of us now.
They were waiting for us at the next tunnel, and the husband chuckled and asked if we were still glad that we had followed them. Of course, we were.
Crawling through here too, this one was shorter, we were at the end, and pulled our bikes up to the towpath.
This was one memorable ride. Beware of older couples! 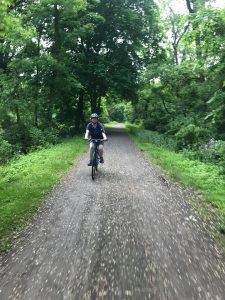 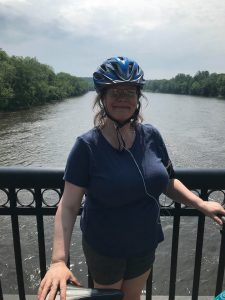 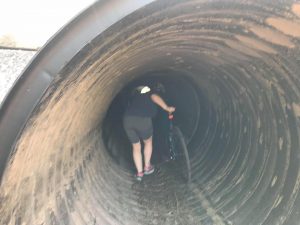